In the spring of 1961 Morris Bailey purchased the firm from DeMoss Crunk. Morris and his wife Joy ran the funeral home until 1979 when they moved to Polo. At that time Morris's son Mark took over the management of the Lathrop funeral home. After the death of Morris in 1994, his son Mark and his stepmother Mary Lou Bailey continued to operate the funeral home until 2002 when it was purchased by the Meierhoffer Funeral Home based in Saint Joseph, Missouri. In 2013, seeing a need for a locally owned family oriented funeral home, Kyle Stith approached Meierhoffer Funeral Home about purchasing the funeral home in Lathrop. In the fall of 2015, the name was changed to Stith Family Funeral Home & Cremation Services. The funeral homes have been locally owned and operated by Kyle Stith ever since. Kyle is a life-long resident of the area and committed to serving families in time of need. Kyle's wife, Erin joined the business January 1st, 2017.

Kyle and Erin work side by side to ensure every family receives the service and dedication they deserve.

The Polo firm was purchased by the Bailey family in 1979 from Tyler Trowitch. It was operated by Morris Bailey until his death in 1994. At that time Morris's son took over management of the Polo firm, along with his stepmother, Mary Lou Bailey. The funeral home was sold to  Meierhoffer Funeral Home in 2002. In the fall of 2013, seeing a need for a locally owned family oriented funeral home, Kyle Stith approached Meierhoffer Funeral Home about purchasing the business. In the fall of 2015 the name was changed to Stith Family Funeral Home & Cremation Services. It has been locally owned and operated by Kyle Stith ever since. Kyle is a lifelong resident of the area and committed to serving families in times of need. Kyle's wife, Erin joined the business January 1st, 2017.  Kyle and Erin work side by side to ensure every family receives the service and dedication they deserve. 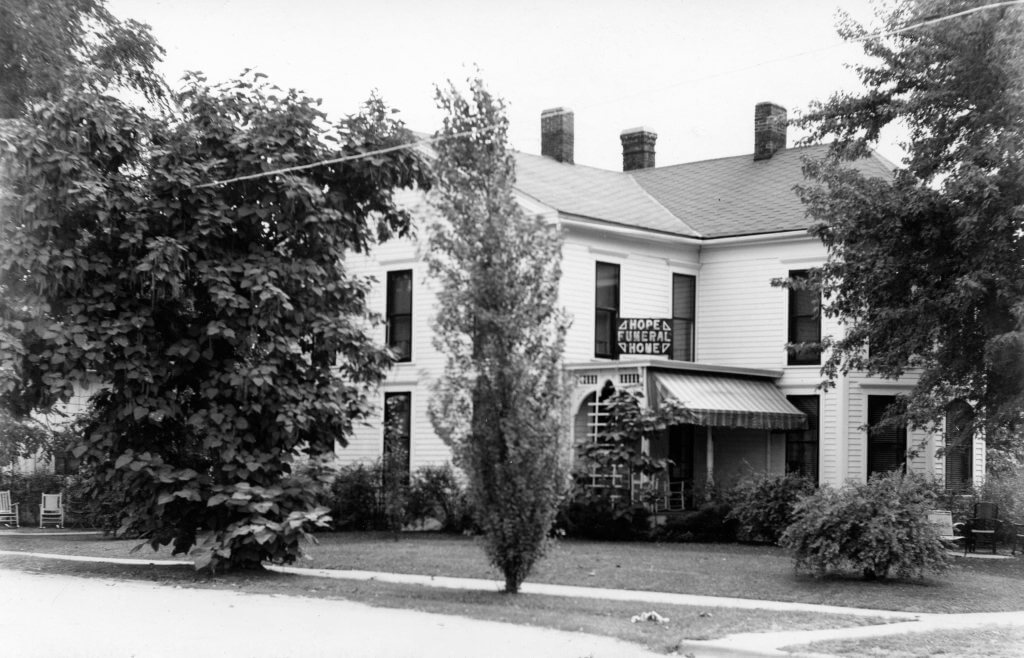 In 1917, Harry Hope and wife Lenna moved to Gallatin and acquired an interest in the L.T. Killam & Co. Undertaking business and changed the name to the Gallatin Undertaking Company (G.U.C.). The Hope Funeral Home was born.

At first it was a two-fold business with half being a furniture store and the other half being an undertaking business.

In 1918, the business announced they would liquidate their furniture business and devote their time to the undertaking business. At this time, they were still advertising broadcloth, best grade steel caskets, steel vaults, marble tombs, and high-grade burial garments.

The announcement also stated that there wouldn’t be any charge for embalming or for any kind of hearse — motor vehicle or horse drawn — or car for the family.

Lenna Hope, also an undertaker, became the first lady embalmer in Daviess County and one of the few in Northwest Missouri. Mrs. Hope devoted most of her work to taking care of the women and the children while Harry would cater more to the men. In one of their sale promotions they advertised five points:

In 1925, the furniture store was no small business and advertised everything from large pieces of furniture to baby buggies.

Stub Richesson joined the firm. At first his duties were mainly in the furniture store, but he soon graduated to the funeral business.

The furniture store had a seven day sale and all merchandise was sold below cost as they didn’t want to move it or store it. They gave people a chance to move it for themselves and at a large savings.

The Hopes always tried to stick to their motto A square deal for everyone is the basis of everything we make. They moved to a new location on the south side of the square, truly making it a square deal.

Harry Hope died in 1941, and Stub acquired one-half interest in the funeral home. Mrs. Hope received her 50 year pin from the Missouri Funeral directors Association in 1967.

In 1969, Steve and Jan Helton returned to Gallatin after Steve completed his mortuary science education and got his embalmers license.

Steve and Jan purchased the funeral home in 1982, making it the third generation of Hope’s services

Hope Funeral Home was located south of the Gallatin United Methodist Church, facing north on Van Buren Street. Harry Hope purchased the inventory of the Gallatin Undertaking Company in 1917 and then operated one of the oldest funeral homes in Northwest Missouri. L.O. “Stub” Richesson married into the family, operated a furniture business and acquired half interest in the funeral home upon Harry’s death in 1941. In 1969 the third generation of Hope’s starting serving Daviess Countians when Jan and her husband, Steve Helton, returned to Gallatin and purchased the funeral home in 1982. (photo circa 1940s)

As published in the Gallatin North Missourian

Why Choose Us?
About Us
Our Staff
Testimonials
Contact Us